Victorinox is perhaps the most, or at least one of the most famous knife manufacturers in the world. I was looking for a knife/ multi tool that could be carried discretely with little bulk or weight for everyday pocket use. There are many many options out there not only from the likes of Gerber, Leatherman and Wenger, but from within the SAK family too. Deciding what it is you need it for is perhaps key when faced with so many options.
I’ve owned a Victorinox Swiss champ for more than 12 years and its usefulness has been beyond doubt, but it’s weight proves to be a little more than I’m comfortable with for everyday pocket-able use.  I set about working out which tools I had used most over the years, and therefore which tools I needed and which I could do without. I whittled it down (please excuse the turn of phrase) to the Victorinox Climber. It has two blades, one big and one small, a pair of scissors, a multi purpose hook, a can opener/ small flat head, a bottle opener/ large flat head, a corkscrew (including mini flathead screwdriver), a reamer (don’t ask me!?), a key ring, tweezers and a toothpick. I opted for the black version, to add a bit of distinction between it and my faithful red Swiss champ. 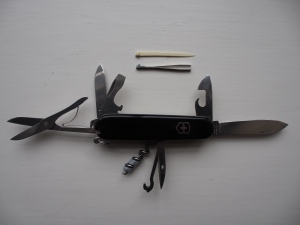 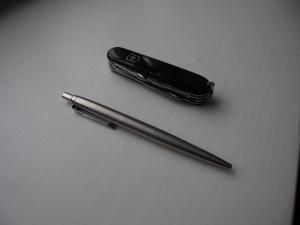 I could not have been happier; it’s size and weight is similar to a single AA torch and therefore it is truly pocketable without loosing any of my most used tools. It has the sturdiness and feel that all Victorinox SAK’s have and I have no doubt that it will be invaluable on the trip or even back in the UK. I had initially overlooked SAK’s for my trip to Africa, and am glad I revisited them. In my opinion, the perfect pocket knife. If by some spasm of the universe you don’t have one, then i think it’s about time you got one.
I purchased mine from Amazon.co.uk for £20 including delivery, but they are widely available all over the high street as well.

Based in the Lake District, Millican inspire an image of an outdoor lifestyle of explorers and adventurers (Like the Lake District legend Millican Dalton they are named after). They talk of a simpler, slower way of life; analogue to the worlds digital, as if harking back to the Victorian era. Much like Finisterre, they have taken the quality and transparency approach over the more technical mass appeal approach adopted by many large manufacturers. The stories behind all their bags and the materials and processes used to build them are a big part of what they are offering.

The first bag I purchased a couple of years ago was Matthew the daypack. It weighs in at 1200gms and has a divided main compartment which is closed with a draw string. There are two concealed front pockets and a zipped area in the lid and lastly two outer side pockets that double as bottle holders. It has a padded and meshed back, as well as a leather grab handle. 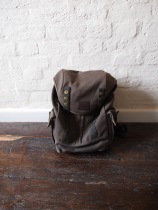 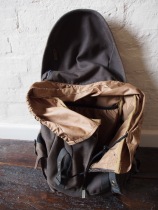 They may seem low tech compared to the competition, but a lot of thought has gone into the design. They are made of cotton canvas, and although not totally waterproof, are tough as anything else you will find out there, and have included an inbuilt raincover at the base of the bag just in case (They do come from the lake district after all!). The popper fasteners take a bit of getting used to, but make for a satisfying pop once you do. The front opening zip adds great flexibility to allow access to all the bags contents. 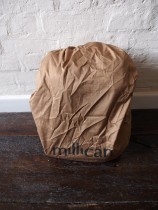 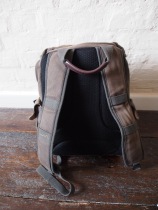 The bag has been all over the place with me. Its spent hours and hours on trains, planes and automobiles, its explored tombs and deserts as well as festivals and picnics. It has aged wonderfully and has taken all things thrown at it with ease. My one gripe would be that the weight of the bag when fully laden can be a tad high, but i would say that is probably a fault of my packing rather than anything Millican could have avoided.

I would like to think that I am a discerning consumer, sometimes painfully so, and I know I have spent far too long researching, examining and using rucksacks of all shapes and sizes, but I was blown away by the feeling of craftsmanship and esthetic quality that is part of Millicans bags. They aspirationally talk of being able to leave pieces to their grand children, but my fantastic experiences with Matthew the daypack inspired me to buy Dave the Rucksack for my Father, which I think says it all.

I’ve long been a fan of the idea of sustainably sourced and produced clothing, but have yet to see the concept so fully adhered to as it is by the British company Finisterre.

Based in St. Agnes down on the Cornish coast. They combine quality materials with production transparency and ultimately integrity. Set up in 2005 their range has expanded over the years as they have further grown their supply chains and further developed their designs and use of materials. Most notably they have been closely involved with the rebirth of the Bowmont sheep, from whose wool the Bowmont (or British merino) pieces come. 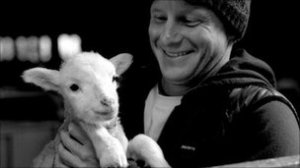 My first order back in 2011 was for a couple of pairs of wool socks for daily wear, and they are still going strong and are as warm and comfortable as ever. I’ve since added a load of other items, but most notably the Boreas Full Zip £95 (a super warm cotton outer/ merino inner hoody) and most recently the Portland Henley £60 (a flexible 160 gsm merino wool long sleeve t-shirt), which offers both warm weather options as well as colder weather layering options. 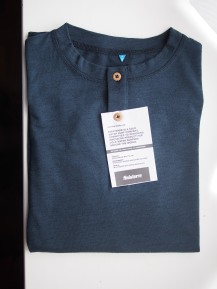 The prices are not cheap, but the quality is high, and combined with great materials their clothing will last. I’ve not had the Portland Henley long, but it is extremely comfortable against the skin, and is beautifully made, with just enough attention to detail to make it stand out from the alternatives.

It’s worth mentioning that their customer service is also fantastic. They are a pleasure to deal with and all transactions are handles quickly, efficiently and ultimately personally, which no doubt adds to their brand.

They are a company who bill themselves as a cold water surf clothing brand, but having not surfed for well over 18 years I can’t really comment on that aspect of their products, but for flexible, ethical, and well made British clothing I have yet to find their equal, and I look forward to seeing just how well they hold up to 6 months on the road.

Something we are really not used to here in the UK is darkness. Wherever we are we can just flick on a light and go about our business. From all that I had read, 6 months in Africa living out of a Land Rover was likely to be very different, so I set out to find a way to bring light to the dark. 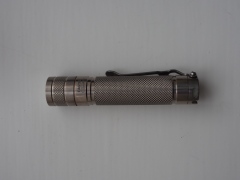 All I needed was to light up the immediate world around me. As many, far more experienced than me pointed out; a torch is only useful if it is with you when you need it, so my brief was a small, light, probably single AA battery torch with a lumen rating of over 100. AA because of the worldwide availability.

I grew up with a trusty two AA camouflage Maglite and was astounded by how LED technology had changed. Single AA torches such as those by Zebralight could produce over 200 lumens from a package barely bigger than the battery itself. After far too much time looking into the different modes and user interfaces I settled on an extremely popular torch; the Eagletac D25a. It produced 176 lumens, was amazingly small and light and ran off a single AA battery. It is operated by clicking the tail switch and the light modes are adjusted by turning the torches head. 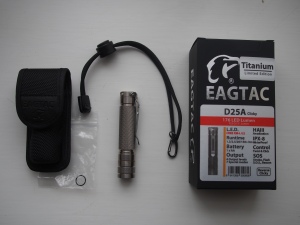 I purchased it from flashaholics.co.uk for the princely sum of £49.95. The lure of titanium was too strong and I plumped for the limited edition titanium model; not really for any practical reason but for rather for more aesthetic reasons I seemed to have picked up while on the many fantastic forums (although I believe it is stronger and a little lighter than the standard aluminium).

I was not disappointed, it is perfect to unobtrusively slip into a pocket, and when switched on in full mode gives out a hell of a lot of light. It also helpfully has a very low mode, which not only allows use at night without too much loss of natural night vision, but also extends the run time dramatically. The clicky button is tough enough that its very unlikely that it would be turned on by mistake in a pocket or bag. My initial thoughts are very positive. Given the criteria I had it is ideal. Whether i needed to pay the over 25% mark up for the titanium model is debatable, but as it stands it seems like the perfect pocket companion for my trusty Victorinox, and will hopefully stand up to the rigours of Africa. 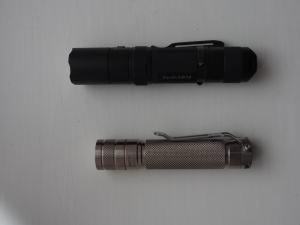 For a size comparison here it is with the beautifully made Fenix LD12, which also runs off a single AA battery.

Finally a big thank you to all those dedicated people who are happy to share their knowledge and passion on the many torch/ flashlight forums!

I was looking to find a couple of affordable but durable knives to perform any tasks that may be required on my upcoming Africa trip. Jobs ranging from food preparation to wood splitting and everything in between. My plan is to carry my trusty Victorinox penknife with me most of the time, but with the vehicle to take the extra weight, having a couple of extra blades seemed like a sensible move.

END_OF_DOCUMENT_TOKEN_TO_BE_REPLACED

There are many many brands of sleeping bag out there, with price ranges from £17 all the way up to £400 and beyond. My brief was an all round sleeping bag that would be suitable for warmer climates as well as comfortable for daily use for an extended period of time.