Domke have been making solid and dependable bags for many years, so they seemed like a good choice to protect my camera kit during 6 months on the road in Africa. Compared to much of the competition they seem pretty pricey, but its clear why once you handle them. Similarly priced brands like Thinktank and Billingham also make fantastic ranges with many of the same features, so I think it’s just a matter of personal taste and preference.

All this plus the camera and kit lens (not shown as i’m using them to take the picture!)

Unassuming appearence is perfect for Africa (Perhaps not in Black though!)

The perceived wisdom seems to be that in certain environments an obvious camera bag is a hinderance, so I wanted a bag that was small enough to stick in a backpack, but also that would blend well as a stand alone bag too. I went for the Domke F -5XB in black. I also removed the Domke logo from the front as I felt this ruined its stealthy, not necessarily a camera bag, appearance. This bag is to house my Olympus OMD- EM5, which along with 3 lenses makes up my main expedition camera gear (I will go into more detail in a later posts), and it easily all fits in with room for the HLD -6 battery grip a couple of additional batteries and a host of other small accessories too. The version I went for is not the toughest Domke ‘rugged wear’ version, but I felt that the ballistic nylon would easily be up to the task. 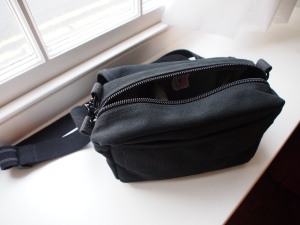 The proudly placed ‘Made in the USA’ label may or may not matter to you.

Its stood up well in the first 6 months, and has been with me on a number of trips. Much like the personally much admired Steve Huff it seems like I have found my perfect bag.  Lets hope it lives up to that billing!

Panasonic has introduced a try before you buy scheme into the UK for their latest Micro 4/3 camera. Pocket Lint has a full article. Interesting idea. If only more manufacturers did the same.

END_OF_DOCUMENT_TOKEN_TO_BE_REPLACED

SD cards are tough little things, but there is nothing more frustrating than discovering that a card has become corrupted and ones precious photos from a trip or holiday are lost. There are fancy ways of getting this data back, but these are by no means foolproof and therefore I set about finding a case to keep my cards safe and sound. My upcoming trip to Africa spurred me on to find one that would handle some extended rough handling and the inevitable dirt, dust and liquid that an extended trip across a continent would entail.